To my fellow mommies, please be aware of the insect bites your children may have.  As much as possible, don’t disregard these as something ordinary.   I learned this the very hard way.  Those simple bites turned into Cellulitis which I will be discussing on a separate post.

I was already in the office when Hubby called and told me that our youngest is having a fever.  Since hubby and mother in law were out, I monitored her through phone calls with her yaya.  At first, my daughter was still her usual self, we talked on the phone.  It was a mystery to us why she was having a fever, she doesn’t have colds or cough.  We thought, maybe she has “pilay” and for her toddler age of 2.5, that would be normal.  Later that day, she’s so tired she’s just lying on the bed and if a child with fever isn’t up and about, then that’s something scary.

When hubby came home, daughter still has fever, her lower leg swollen unlike anything we have seen before and then they noticed a bite on the swollen part.  The bite’s super tiny, but its damage was pretty huge.  D has a previous bite that she kept on scratching, so it doesn’t dry up but we were pretty sure the swelling didn’t come from that, or so we thought.

I got home and I immediately sent pictures of her leg to her pedia.  He told us to let her take Ceporex for antibiotic and to put some Bactroban cream.  Whole night we were restless because of her condition.

Still with fever and swollen leg even with her antibiotics, we decided to take her to her pedia. Her pedia suggested we see his Surgeon friend. And so we did, we were so scared because the Surgeon told us at once to confine D because of her condition, which he diagnosed as Cellulitis. He told us that it was the best thing to do. He even showed us some pictures of the worst cases he handled. It was so scary. He strongly suggested confinement and IV treatment in the hospital.

We coordinated with our pedia and he said confinement was the best thing. So we went straight to the hospital and admitted D.

This was the 1st time a child of ours would be hospitalized. Seeing my precious little D fighting with all her strength as we pin her down for insertion of dextrose was just heartbreaking. She was crying and shouting and screaming and I was crying inside too. But I can’t show it to her. I needed to be extra brave so she can be brave too.

Finally, she stopped crying. However, since she needed to take Antibiotics for her condition, they have to make some Allergy tests a few minutes later. This meant 2 injections again. It was very painful for a mother to see her daughter in pain. At such a young age, she experienced all these. My heart was breaking.

Nightime went by easily. Hubby took the 1st night duty in the hospital since I haven’t had much sleep yet. 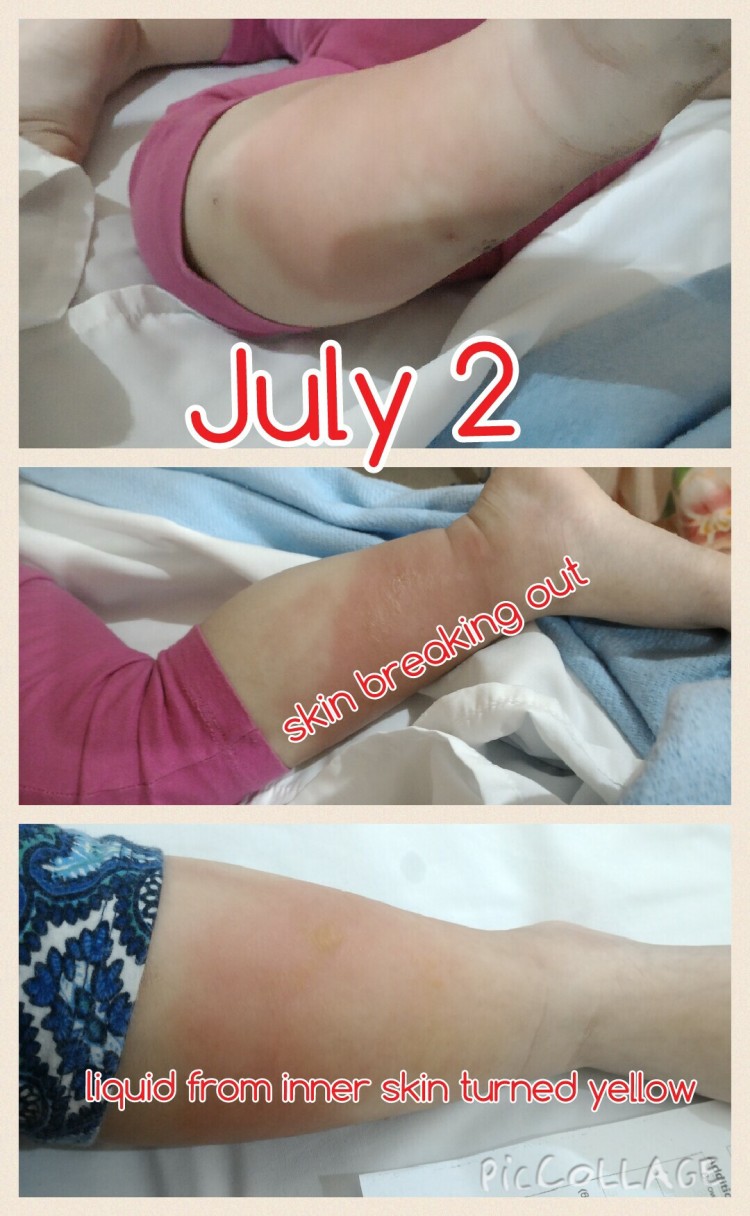 Next morning, D was still traumatized, everytime our door opens and someone she doesn’t know comes in, she gets terrified. You can really see in her eyes how terrified she was. I felt helpless, I can’t do much but to comfort her and just hold her hand.

As with her condition, the first to go away was her fever. Since the infection was already being treated, the swelling slightly lessened. The redness was still present though.

Thanks to the Minions, D was distracted. Since it was the 3rd day already from her traumatic experience with the needles, she was now happier and feeling a lot better. She is now friends with the nurses and the doctors. She learned how to use only her right hand and disregard her left hand.

By this time, she was back to her usual self, jumping around even with her dextrose on. Playing with her toys. And gaining back a little appetite.

Her leg has eased up on the swelling, some parts are totally back to normal, while some badly hit by bacteria parts are still not responding to the antibiotics.

We thought we could go home by lunch today. But as the doctors advised us to just stay and complete the 5 day cycle of antibiotic through IV, we were left with no choice but to stay until Monday.

Yesterday’s jumping around continued until today so the dextrose was disconnected from D’s vein. She had to go through another insertion with her right hand. I can’t bear to look at her go through it again, so I just let hubby take her to the room to reinsert her dextrose. As expected, she was crying when she got back to the room. And, she’s back to being terrified with the nurses.

Her leg has a big improvement today. The swelling is gone. The wound is drying up. I just have to be on the lookout for her scratching 24/7.

D’s leg is clearing up. Swelling is gone, a little redness here and there. The parts of the skin that expanded are now drying up. The wound is definitely dry.

Intravenous Antibiotics are still ongoing. Cycle needs to be completed.

She is happier now. Not that scared with the nurses anymore. When they come in and check on her, she will tell me “they are just checking mommy”. I always tell her that they will just check her and they will not do anything to her. So she got it from there. The antibiotics and dextrose are all just water she needs and she’s okay with that.

July 6
Finally, this day has come. But unlike patients who get to go home by noon, we were extended until almost 5pm in the hospital. There was a shot of Clindamycin she needed to take at 4pm, to complete the cycle.

When her dextrose aka STRAW was taken away, she was so happy and excited to roam around the room and go up and down the chair. She felt so free!

She even danced and sang the Nae Nae.

When we got home, this was how her leg looked.

The parts terribly damaged by the bacteria has thoroughly dried and is peeling off to give way to new skin.

We really are on our way to recovery.

Thank you for the prayers and the concern! D loves you all!

4 thoughts on “Hospitalized by Insect Bites”